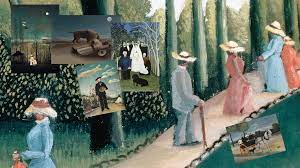 Henri Rousseau (1844 – 1910) was a French Post-Impressionist and Primitivism painter. His unique and charming style influenced many famous modern artists like Pablo Picasso. He is one of the successful painters who was entirely self-thought.

Henri Rousseau’s art falls under Naïve art, also known as the Primitivism movement. Primitivism derives from the idea that art is something primal in nature and, therefore, should be expressed as raw and accessible as possible. It closely resembles tribal and prehistoric art’s aesthetics in its style and message.

There have been many world-famous artists who were intrigued by this unusual style of painting. These included Paul Gauguin, Pablo Picasso, Jean-Michel Basquiat, and Henri Rousseau. The following presentation explores some of the best Henri Rousseau paintings and the painter who created them.

The Portrait of Pierre Loti is one of Rousseau’s most famous and instantly recognizable paintings. It has everything you could ask for in a Post-Impressionist portrait painting, from the bold coloring to the absurd shapes, as well as the brash depiction and quirky nature of the character model himself.

The painting is also often lovingly referred to by fans as Cats and Hats. Although the painting is meant to be serious, there is also an undeniable element of the comical. The man and the cat both have a whimsical impression, and like many Post-Impressionist paintings from the period, they can’t help but make you smile.

When studying the Portrait of Pierre Loti more closely, it is easy to see the similarity to the work of Pablo Picasso. Painter Henri Rousseau’s art greatly influenced the young Spanish painter’s style, and his success wouldn’t have been what it was if not for his artwork of Rosseau.

Above everything else, Henri Rousseau is perhaps best known for his incredible jungle paintings. However, it is noteworthy that despite Rousseau’s beautifully vivid and vibrant depictions of the jungle, he never actually visited a real one.

The jungle’s Flora and fauna symbolized something much more than what appears on the surface. To Rousseau, the jungle and its many inhabitants act as a metaphor for much deeper philosophical ideas, such as life and death, beginning and end, and the primal nature of reality that the Primitivism movement was based on.

Whether it is a colorful jungle maze or a sprawling French plateau, these landscape pieces are some of Rousseau’s most impressive and captivating masterpieces. It was also where Rousseau learned to paint if his quote “I had no other teacher than nature” is anything to go by.

The Sleeping Gypsy is one of Henri Rousseau’s most famous and highly acclaimed paintings. Many critics and art lovers see this painting as their favorite Rosseau piece for its highly fantasized impression and dreamy musings.

The painting is exceptionally Post-modern in its composition and has even been compared to the Surrealist works of Salvador Dali in its theme and tone. The painting portrays a scene of a traveling woman sleeping in a desert under a moonlight sky with her guitar by her side.

Unbeknownst to the sleeping gypsy, a lion has crept up on her and is stalking just over her shoulder. The lion is not aggressive to the woman, and the two seem like companions. This charmingly beautiful painting is said to represent the poetic harmony of humans, animals, and nature alike.

The Dream is the last ever painting Henri Rousseau completed before his death and is also one of his most well-known. It contains within its canvas practically all the troupes that the French artist became renowned for, including, of course, a jungle.

This is undoubtedly one of Rousseau’s most symbolic paintings, as several religious and mythological elements are depicted therein. In addition, a tone of Hinduism and Buddhism is also present, with symbols such as snakes and lotuses scattered throughout.

It seems that Rousseau was also personally attached to this painting in favor of some of his others. Moreover, he went so far as to write a poem accompanying it, which he felt added to the overall experience of the painting. With its mythological and religious components, as well as its distinct Rousseau swagger, this is one Rousseau painting definitely worth checking out.

There is a lot more to Henrimucheau’s paintings than just colorful jungle scenes. At its core, Rousseau’s art was about exploring nature, self, and the relationship between the two. For the reasons mentioned above and many more, it is easy to see why Henri Rousseau’s paintings are famous worldwide.