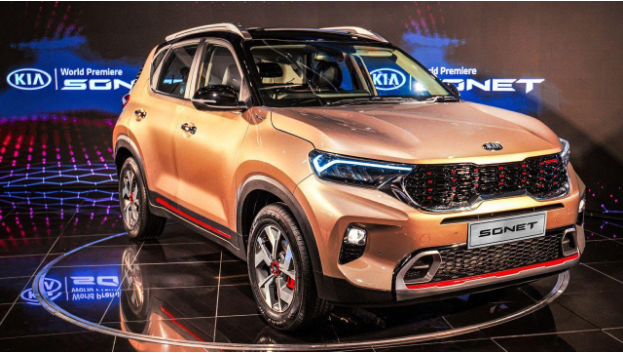 The Seltos has proved to be a resounding success for Kia in the Indian market, and going by the success of its first model, Kia is gearing for the launch of its third offering – the Kia Sonet: a compact SUV to take on the likes of the Hyundai Venue, Tata Nexon, Maruti Brezza and Mahindra XUV300. Kia is quite keen on selling the Sonet in large numbers, so we take a closer look to see what makes it so interesting.

From Concept to Production

Kia unveiled the concept version of the Sonet earlier this year, at the Delhi Auto Expo. And we’re happy to note the final production model is very identical to what the concept looked like. There were very details on the concept that haven’t trickled on to the production-spec car, and we’re not complaining. Gone are the recessed door handles and in come the more conventional pull-type ones. The ORVMs are larger in size and there are a few cosmetic differences that separate it from the concept

Striking to look at

The Kia Sonet definitely looks good with its signature Tiger Nose grille up-front, with its knurled treatment and three-dimensional inserts and red accents available on the GT Line variant. The LED headlights are very futuristic and look cool with the signature ‘heartbeat’ DRL patterns inside. The sleek-looking bumper gets fog lamps in place of the air-intakes seen on the concept. Below the bumper, you’ll notice large air intakes with hexagonal mesh treatment, and the bonnet looks quite chunky. The side profile is a lot less in-your-face, thanks to the flared wheel arches and the black colour theme on the upper and lower half of the C-pillar. We also like the look of the quarter glass. Even the 16-inch alloy wheels look identical to the ones seen on the concept. The tail lights at the rear look very smart and are joined by a reflector strip in the middle. You’ll see the ‘heartbeat’ signature detailing in the tail lights too. The exhausts are fake, and the skid plate gets a silver finish.

On the inside, the Sonet shares nothing with the Hyundai Venue. The dashboard is beautifully designed with a nice sporty steering, good quality door pads and well upholstered seats. Fit and finish levels are great. The seats are very accommodating and there’s lots of space for the occupants at the rear. The boot space should be similar to that of the Venue’s. Everything in front and around looks very contemporary when seated in the driver’s seat. The Sonnet also gets a digital speed readout along with a multi-information screen. Drive modes and traction control will be offered on the automatic model, while remote engine start and AC pre cooling will be provided on the manual variants too.

Kia hasn’t revealed the specifications and engine options, however, you can expect it to be powered by a 1.0-litre direct-injection turbo petrol, a 1.2-litre petrol and a 1.5-litre turbo diesel engine. Gearbox options will include an iMT (a clutchless manual seen on the recently launched Venue), a 6-speed manual, dual-clutch automatic, a torque-converter automatic and a 5-speed manual transmission.

The Sonet comes with great looks, a well-built interior, loads of segment-first features, a wide choice of powertrain and drivetrain options, making it a very capable product in its segment. However, given how successful the Sonet is, we just hope Kia does’t take the pricing too far, because they seem to have a winner, if priced competitively. Also, grab the latest info on the upcoming cars, only at autoX.