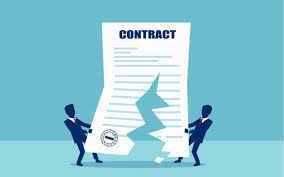 We’ve been signing contracts for thousands of years. In fact, the oldest legal contract we have was a prenuptial agreement carved into a tablet. This tablet was created in Assyria, a bronze-age empire in what is now the Levant.

Contracts haven’t changed much over the years, aside from being mostly written on paper now. Two parties agree to provide something to each other, whether it’s companionship, services, secrecy, or something else. The contract serves as a record to legally bind each party to their end of the deal.

This brings us to the issue of contract breach. What is a breach of contract, and what are the consequences? We’ll talk more about that in this article.

What Is a Breach of Contract?

Breach of contract is a tricky thing, though, because technically any rule agreement broken, small or large, could, in theory, be grounds for breach of contract. However, many breaches of contract cases involve intentional or major violations of the contract.

It’s generally accepted that there are two types of contract breaches: material and minor.

Material breaches mean that the breach was substantial and unnecessary. Material breaches are usually intentional because it’d be difficult to accidentally make a mistake of that magnitude.

A good example of this is if you agree to give someone 400 bricks for $350 upfront. You get the money, but don’t bother to deliver any bricks. You’ve ignored your part of the contract and therefore have committed a material breach.

Minor breaches are far less serious, and could very easily be an accident. Perhaps you agreed to deliver something at 3 p.m. Saturday, but there was a traffic that made you fifteen minutes late, or a freak blizzard made it impossible to drive safely until Sunday.

While you did technically breach the contract, the reasons for the breach were beyond your control. Plus, you still ultimately held up your end of the agreement, even if you were a day or two late.

Consequences of a Contract Breach

The consequences of a contract breach often depend on the type of contract breach. A minor breach, for instance, probably won’t result in legal action, because the contract was completed and the potential money lost is probably not enough to merit a lawsuit.

Material breaches are far more likely to cause a lawsuit. The breach of contract is serious enough that it’s easier to prove intent. Plus, the breach is more likely to have resulted in large amounts of money lost.

Contract breach lawsuits can drag on for quite some time, which is why you may want to check your eligibility for a settlement loan. It’ll help you pay some of the costs.

Now You Know What Is a Breach of Contract?

If you want more information on various lifestyle topics please visit our site.