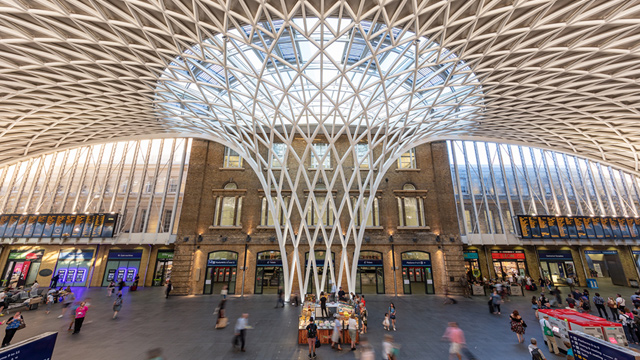 London, the capital city of London and the United Kingdom, is massive and can feel daunting to first time visitors. You likely won’t have the time to trek the entire 607 square miles of the city, but here’s a list of a few places to visit. From King’s Cross to Victoria and everything in between:

Home to Harry Potter’s Platform 9¾, King’s Cross is a passenger railway station in the London Borough of Camden. Visitors will find Harry Potter’s trolley stuck in the wall which allows for a unique photo opportunity for fans. Next door to the station is the official Harry Potter shop where you can deck yourself out in wizarding gear for the Tube ride home. Aside from the Harry Potter memorabilia, King’s Cross is a popular base for people to travel within the city as it can easily take you to various locations within the city in a matter of minutes. Be sure to use luggage storage in King’s Cross Station so you can sight free efficiently and hands free.

Go to Buckingham Palace for the Changing of the Guard

You can see and learn a lot by taking a trip to visit Buckingham Palace in the West End. Built in 1847, this is where Queen Elizabeth II spends most of her time in private quarters. The palace is outfitted with more than 700 rooms and is protected by the British Foot Guards. These guards put on one of the most popular displays of pomp and circumstance, the Changing of the Guard. At 11:30am, regardless of the season, the guards put on a free display of precision marching and music at St. James’s Palace.

Spanning an impressive 350 acres, Hyde Park is London’s largest outdoor green space and is wildly popular with tourists and Londoners alike. One of the landmarks in the park is the 18th-century man-made lake that is mainly used for boating and swimming. Bring a blanket and order fish and chips to go and have a relaxing picnic in the park. The London Zoo is located within park grounds and is a great spot for families traveling with younger children.

Shop ‘til you drop at London’s markets

London’s markets have something for fashionistas, foodies, floral aficionados, and just about anything in between. Originally built in 1876, the Old Spitalfields Market offers a wide selection of flowers, antiques, art, and jewelry. It’s also a great example of a traditional Victorian Market Hall. Camden Market is likely to have something to interest everyone in your travel group as it houses more than 100 vendors that sell food, clothing and other goodies you can take home as a souvenir.

Take a selfie atop the London Eye

One of the many quintessential London activities is taking a ride around the iconic London Eye. The large scale ferris wheel will get you up close and personal views of the Houses of Parliament and Big Ben before sending you up hundreds of meters towering over the landmarks and offering you sweeping views of England’s capital city. Be sure to have your camera ready for a selfie when you make it to the top of the wheel. It’s a spectacular photo opportunity and will be quite an interesting experience for you and your group. Be prepared to spend a pretty penny as London Eye tickets are pricey, starting at about $65 per person.

Gawk at Crown Jewels in the Tower of London

Another one of the UK’s iconic buildings, this World Heritage Site is home to the famous Crown Jewels exhibition, the Beefeaters, the Royal Mint, and some not-so-kid-friendly gruesome exhibits about the executions that took place on the grounds. Adjacent to the Tower of London is the Tower Bridge. This proper London landmark is suspended 200 feet over the River Thames and is relatively close to some amazing restaurants worth stopping into for lunch or dinner. You can buy tickets to these attractions in advance, which is recommended especially during popular travel times like summer or other holidays.

Immerse yourself in a gorgeous summer garden

Although Richmond Park is technically just outside London’s city limits, it’s worth the trip out there. You can enjoy captivating views in each of the eight Royal Parks on the property by foot or on horseback. If your trip is during spring, it is heavily encouraged to visit the Isabella Plantation, a Victorian woodland garden. It spans an incredible 40 acres and is filled with colorful flowers arranged in such a way to make you believe you are living your own personal fairy tale.

Opened in the 1860s, Victoria Station serves as London’s gateway to the south by connecting the capital to the seafront at Brighton and the cities of Kent. It provides service from Gatwick Airport, one of the many London-area airports, and is considered to be one of the best connected stations in all of London. Just a 10 minute walk from Victoria Station is Tate Britain, one of the UK’s most prestigious and impressive art collections. It’s also nearby to a few museums like the Natural History Museum, Science Museum and the Victoria and Albert Museum – all of which are free.